Last week, the White-throated Capuchin monkeys came by our place again and, of course, we always have stop whatever we are doing to watch them!  Every time they visit, they are braver and braver.  They come onto the terrace, right up to the sliding glass door and peer in at us through the wrought iron bars.  Sometimes they hold onto the bars and pound on the glass or test the screen.  We are starting to feel like we live in a zoo and we are the ones on display!

During this visit both Eddie and I happened to be fairly close to the sliding door.  A couple of monkeys had ventured onto the terrace.  I started to play a game of “hide and seek” with one of them.  I would look over the chair and then under and the monkey would try to find me.  It was really cute!  The monkeys are very curious and they seem to be pretty smart, too.

Earlier in the day, I had washed some laundry and hung the clothes on the line to dry.  Before the monkeys arrived, I had returned to the laundry room and closed the lid of the washing machine, but I didn’t slide the screened door (with bars) closed.  Lopez had his tool box on the floor and had been coming back and forth to get certain tools, so I left the door open for him. 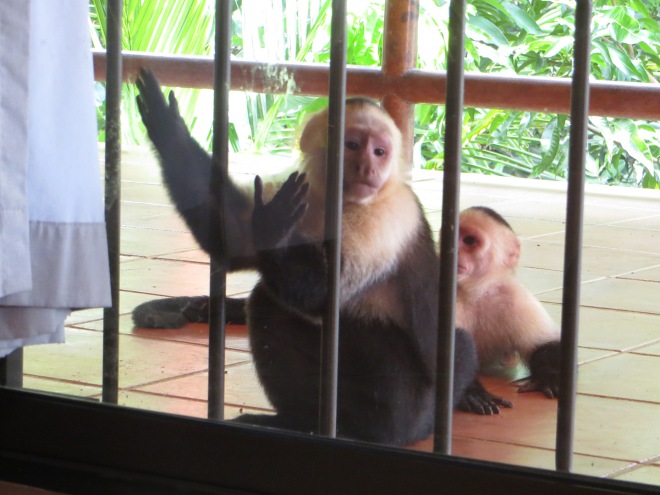 Eddie managed to get some video of their visit.  After a bit, you will notice that one monkey left the group by the sliding door.  He was headed for the end of the terrace where the laundry room is located. (It’s only accessible from the outside.)  A few moments later, we heard a big clunk and I realized that the monkey had ventured into the laundry area and had most likely found the tool box.  Eddie stopped filming just after we heard the noise, so I mentioned to him that we should check the laundry room.  Eddie hopped up to run outside and this startled the monkeys by the door and they ran off into the trees.  As Eddie rounded the corner of the house, he saw the monkey who had been in the laundry room in the middle of the terrace holding a large screwdriver.  The monkey ran off with it and Eddie followed in pursuit clapping his hands as he ran.  The clapping noise scared the monkey just enough to cause him to drop the screwdriver in the dirt under the trees.  So, the monkeys really do take things!

The next day after this visit, Eddie and I returned from a trip to Dominical to find the monkeys on the terrace next to our dining table playing with Eddie’s two barbell weights that he keeps next to the aquarium by the laundry room.  They were rolling them around the terrace!  The weights are pretty big, so the monkeys weren’t able to roll them under the railing.  Unfortunately, we weren’t quick enough with the camera to get a photo.  The dashed off as soon as they heard us.  We wonder what they will get into next time they visit.

One thought on “Living in a Zoo”