Our appointment with Costa Rica Immigration in downtown San Jose was scheduled for Tuesday, November 11, 2014 at 9 a.m.  We were meeting our attorney at his office at 8:30 a.m.  Since it was early in the morning, we decided to drive to San Jose on Monday afternoon and stay overnight.  As I’ve mention in previous posts, it’s about a 3 hour drive to San Jose.  We weren’t on the road that long; we were somewhere between Hatillo and Quepos when the cars in front of us were stopped on the highway.  At first we thought it was because of an accident, but we quickly realized that traffic had halted due to a sloth in the middle of the road!  Everyone got out of their cars (myself included) to take some photographs.  The 3-toed sloth was crawling along the pavement as fast as he could move.  Even so, he was moving slowly to me.  (See a previous post about sloths…) 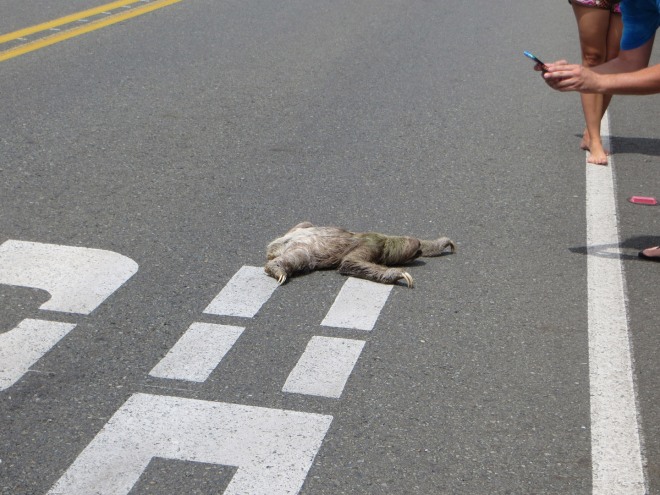 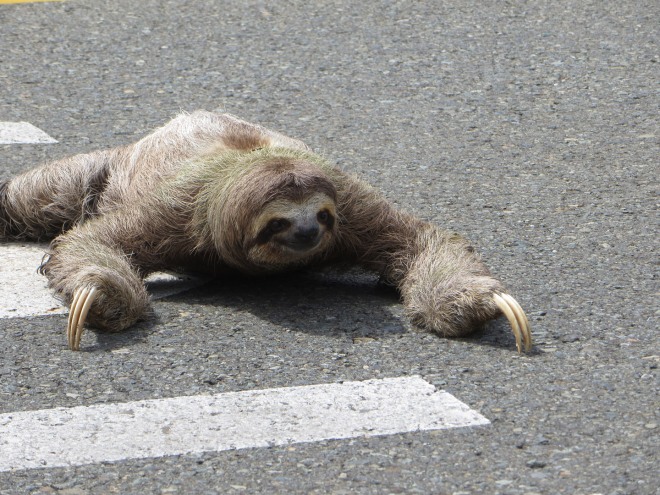 Our appointment at Immigration went well over all!  Our attorney drove us there along with another couple.  We met up with two more couples (one with a teenager about 13 or so) at the Immigration office.  We all got into line and our attorney gave us forms and instructions.  He was not allowed to come into the Immigration office with us.  So, we were on our own!  Eddie and I waited about an hour and 15 minutes in the waiting area for one of our names to be called.  Our attorney told us that whenever either of our names were called, we were to go in together.  My name was called first and it was pronounced “Aye-jayn.”  Good thing a friend prepared me for that or I might have missed my chance!  Thank you Darlene 🙂

We were a little nervous about the appointment as we were a week over our 90 day allotted time period because of our visit to North Carolina in September/October.  We were very fortunate that our Immigration officer didn’t question us about being a little late.  (It could have added hours to the process.)   Two of the other couples with us were not so lucky…and ended up being there most of the day.  (We had to take a cab back to our attorney’s office to retrieve our car because he had to stay with the other two couples who were having troubles.)  We aren’t sure why we fared so well, but suspect that knowing some Spanish helped us a lot.  Because we both are under age 65, we had to go to the post office (just around the corner) to arrange to have our Cédulas (residency cards) mailed to us.  If we had been over 65, our cards would have been issued the same day.  The Cédulas were mailed to the Quepos post office via registered mail, which is the closest post office to us.  We were told it would take one week.  Sure enough, we stopped by the Quepos post office this past Tuesday afternoon and our Cédulas were there! 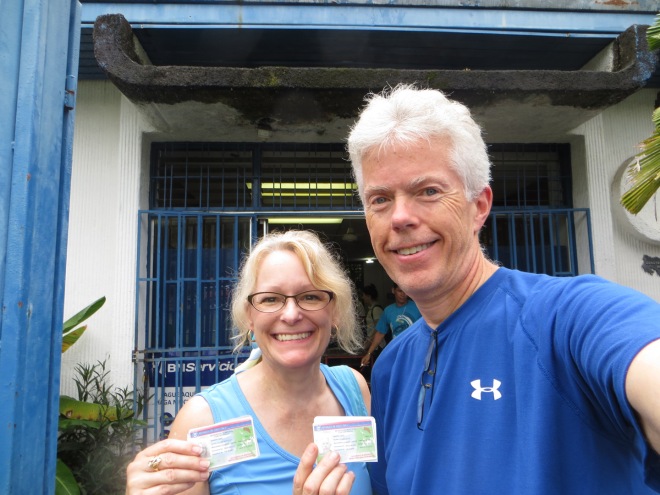 Cédulas in hand in front of the Quepos post office!

So it’s official…Eddie and I are now temporary residents of Costa Rica!  Our Cédulas a good for two years.  Then, we renew them for another two years.  After that, we will be able to apply for permanent residency, which will give us a longer time between renewals.  Once our tourist visa stamp in our passports expire, we can apply for our Costa Rican driver’s licenses.  Stay tuned!!!

2 thoughts on “It’s Official! We are Residents!!!”