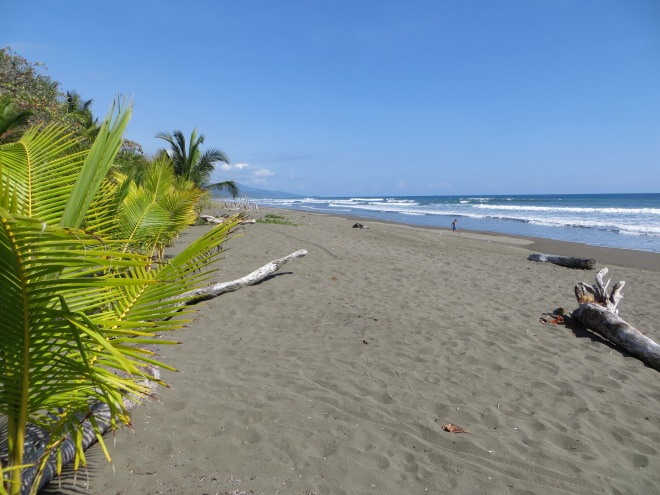 Last week, we discovered another gorgeous beach!  It’s not very far from where we are renting…just two small towns away.  While having a nice long walk on that gorgeous beach, we found some very interesting things – two shells with spines and a tiny blue “jelly fish.”  We’ve never seen either of them before – ever.  We took a photo of the blue “jelly fish” and left it were it was laying in the sand, even though it was very pretty and would have made a nice addition to my sea collection.  It appeared to be dead, but we weren’t sure about it.  I’ve heard that jelly fish can sting even when they are dead.  So, we were very cautious!

The shells, on the other hand, appeared harmless, but we were very careful in handling them.  They were delicate and the spines very sharp.  I carried them back in my hands with care to the truck where I put them on the back seat on a towel to protect them.

After we returned from the beach, I spent an hour looking at many photos of shells on the computer in the hope of identifying them.  From what I found, I believe I know what they are, but I’m not positive.  I do know that they are bivalve shells and I think they are called pitar lupanaria (with curved spines on the posterior slope of each valve).  The pitar lupanaria was discovered by Lesson in 1830 and they are found in the Eastern Pacific Ocean.  The shells are a species of the Venus clam.

While I was researching about the shells, Eddie was researching the “jelly fish.”  He discovered that it’s not a a jelly fish at all, but a marine organism consisting of a colony of hydroids called porpita porpita or Blue Button.  It’s in the Chondrophore family and the sting of the Blue Button isn’t powerful, but it may cause irritation to the human skin.  I guess we were wise not to touch it!

You never know what you are going to find in Costa Rica!

3 thoughts on “Strange Findings on the Beach”