Yesterday (February 15), we spent all afternoon at the first annual Costa Ballena Craft Beer Festival near Uvita.  It was a fun event!  There were over 200 people there, mostly expats and tourists, but there were Ticos, too.

We sat a table with a group of young Ticos, who drove from San Jose just for this event.  One of them commented to me that it was strange being a minority in a sea of foreigners.

Interestingly, Costa Rica doesn’t offer a wide variety of beers in the stores.  There are three Costa Rican brands that dominate here – Imperial, Pilsen and Bavaria – all made by the same company.

There are a few imported beers available, such as Heineken and Corona, but are more expensive.  Craft beers in Costa Rica are still very much in their infancy.  Eddie had a great time sampling all the different beers and learning where to purchase beer making ingredients here.

Eddie discussing beer brewing with one of the vendors

There were five breweries pouring samples of their beers.  As each attendee registered they received a complementary beer glass with the event logo that they would then use for sampling the brews.  The samples were very generous, sometimes a half glass instead of the typical 4 ounces.  I enjoyed taking a few photos, people watching and hearing all about the beers (which I don’t drink).  Designated drivers were able to get into the festival for free, so I signed up for that and received a free glass, too.   Fortunately, Eddie didn’t need me to drive home, for which I was very grateful!  I’m still nervous about driving here…look for a post on that topic in the near future. 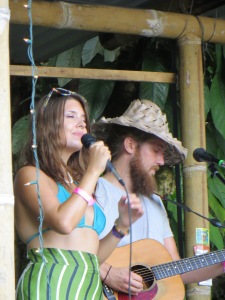 There were several bands playing and they were all very good.  After a couple of hours (and a lot of beer for some), there was dancing and everyone was in a happy mood. 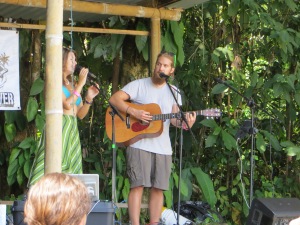 Enjoying the day. The guy in blue was sleeping or passed out – not sure which.

We met some interesting people at this event, as we have on many of our travels here and there, though we don’t always see them again.  Just as we were leaving in the late afternoon, we spoke with a group of Peace Corp workers who were from UNC Chapel Hill!  It’s a small world…you never know who you’re going to meet.

This morning, Eddie made some banana pancakes and fruit smoothies for breakfast -Yum!  Afterwards, he froze the rest of the ripe bananas – about 30 of them.  The frozen ones are perfect for our smoothies and for baking, too.  The bananas all seem to ripen at the same time, so freezing them works out well. 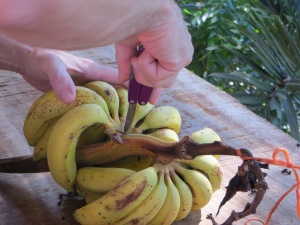 I have a feeling we may run out of ideas on how best to use them.  Not long ago, Eddie found yet another rack of bananas ready to cut from the tree and hang up to ripen.  I spent this morning, cleaning around the house, doing laundry and catching up on emails.  Now it’s time to get cleaned up for a late lunch at Ballena Beach Club with our friends George & Susie and another couple we met recently.