Yesterday (January 10) was my birthday and we had some wonderful plans, a lovely lunch and trip to the fancy mall in Escazu. Unfortunately, those plans never happened as I was stricken with some intestinal disorder that kept me from straying too far from our room!  It was one miserable day. The culprit was most likely due to the Caesar salad I ate for lunch a day or so earlier. It was just too much for my system to eat all that greenery at once and I should have known better as I have a very sensitive system. Everyone here says that it takes time for the body to get used to new bacteria and flora. In any case, it was a surprise that I could have done without.

Today was a much better day! I seem to have recovered from whatever ailed me and was all ready to go along with Eddie to look at some used Toyota Hilux pick-up trucks.  This afternoon we drove to Cartago about an hour away from our B&B to look at the Hilux.  We stopped at a store called Pequeno Mundo in the center of town, parked in their lot and called the guy to meet up as we arranged only to find out that he didn’t want to meet there as it was a 30 minute drive for him. So, we drove another 30 minutes to a town called Orosi. It was a beautiful drive and a quaint town. Amazingly, we managed to communicate fairly well in Spanish.  After a look under the hood and a test drive up a steep road, Eddie wasn’t impressed with the truck.  It was bought in Panama and had evidence of being re-painted, which hadn’t been disclosed and was noticeable. At least it was a pretty day for a drive and we saw some gorgeous scenery.

View of Orosi from lookout from steep road 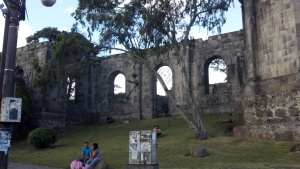 Ruins in Cartago taken from the car

On our way back, we went into Pequeno Mundo where we had parked earlier and discovered that it’s a discount store. It had all sorts of things from clothes, linens, houseware items to food. We bought Styrofoam noodles for the pool, plastic hangers and salsa for a total of $5. Not bad at all!

It looks like it’s going to take much longer than we thought to purchase a vehicle, so we have arranged to stay in our B&B a few days longer.  Now, we are planning to leave on Thursday for our rental house in the Dominical area, which is on the Pacific side of Costa Rica.

5 thoughts on “An Unwelcome Surpise…”